Enjin's GraphQL API is critical to their mission of putting blockchain tech in the hands of game developers, allowing them to build both client and server-side integrations into their games. 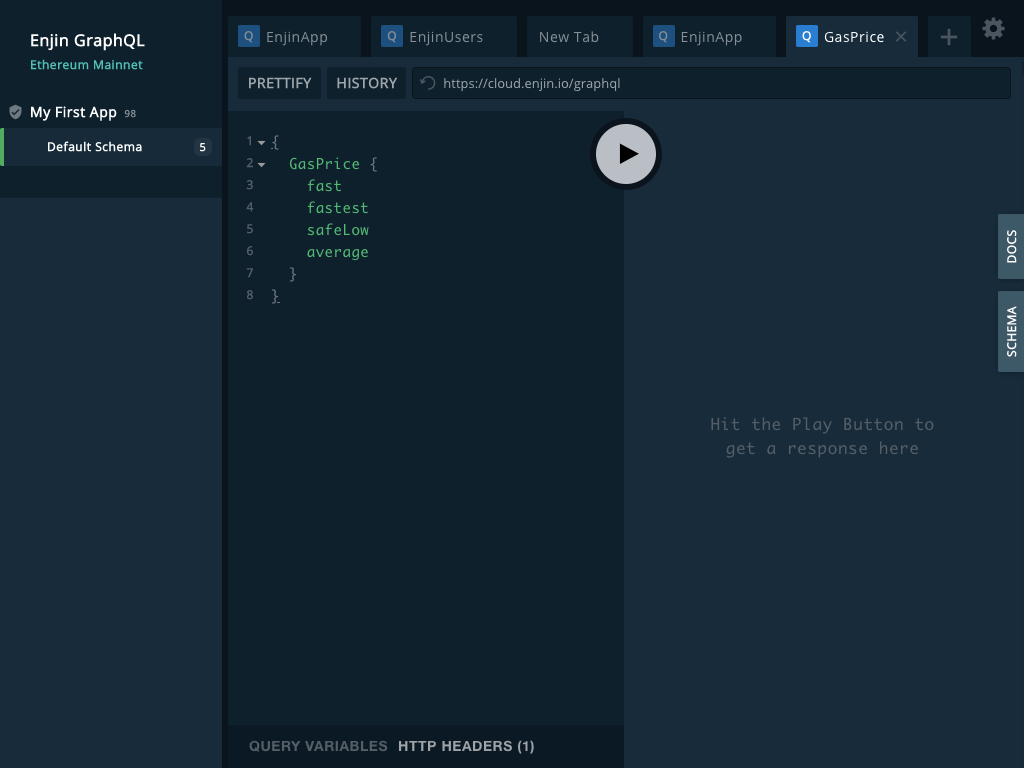 At the point I started working on Enjin Cloud there was already a v1 API in place, but there were a few problems:

I spent a majority of my time simplifying resolver logic and stripping features from the v1 API, and adding test coverage so we knew what was possible and whether it worked. 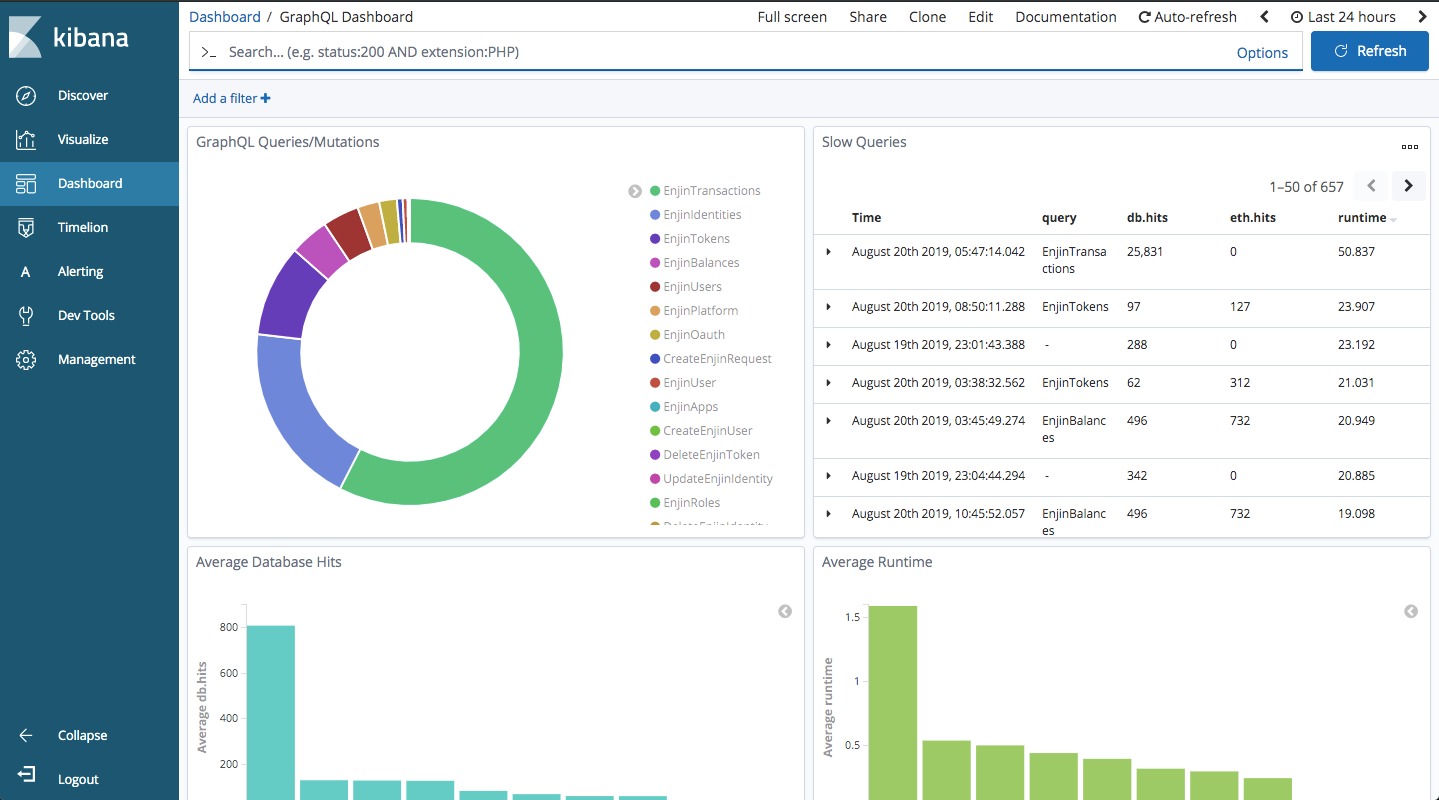 As I looked into Enjin's GraphQL API it became apparent there were many arguments, fields and queries we'd want to deprecate. Field deprecation is supported by the GraphQL spec, but argument deprecations aren't, and any changes typically risk breaking integrations; to do them we needed insight into what clients were actually using in production.

Traditional API logging tools don't help much with GraphQL, so I added resolver middleware support into GraphQL Laravel and set up an ELK stack so we could intercept the processed AST and fire some logs out to a Logstash for visualisation in Kibana.

After I shipped this we were able to identify a number of problems that were leading to slow queries and make data-driven decisions regarding what we removed. 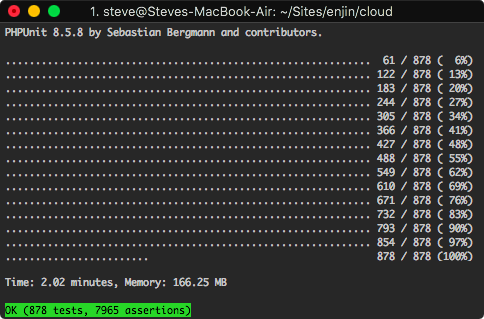 I wrote over 800 PHPUnit tests for Enjin Cloud, most of which added coverage to the GraphQL API. The team had struggled in the past to exercise the API mostly because GraphQL is non-trivial to test out of the box with the Laravel test client, and because of SRP problems in core classes that interacted with the blockchain making mocking difficult. I made it my mission to make it easy for developers on the team to be able to write tests for their changes.

The steps I went through to get there were:

The resulting test suite made it a lot easier to establish what was possible via the existing APIs, and design what the new schema should look like in v2.

Next steps with the v2 API

Enjin's API is somewhat unique in that there are conceptually 2 primary consumers: games developers, via their server-backend, and players, via a client-side game. Many games may wish to do everything server-side, and in which case they're going to want to be able to have quite a broad set of access controls, but when they generate an access token for a player and pass it down to the client-side, they're going to need very limited abilities granted to those players.

Many challenges in the v1 API stemmed from queries and mutations trying to serve a broad range of user types all at once, which lead to lots of noise making it unclear what the core business logic fundamentals of these individual resolvers really was.

In the v2 API I proposed that we break out this API into 2 distinct schema: app and player, that removed this ambiguity, and made it clear though the schema which queries were available to whom, and how to authenticate for them, while also allowing us to drop lots of deprecated behaviours from the new schema.

Migrating from Vue Material to Vuetify

The frontend was originally written in Vue Material but given the project seemed somewhat stagnant and we needed to make some fairly significant changes to our implementation anyway I decided it was also time to move the project over to Vuetify so that we could leverage the more established components such as data table pagination.

In addition to this, some of the other significant frontend works I lead included:

The resulting experience was a significant improvement for both desktop and mobile users, and made it a lot easier for other developers to add pages into the UI that conformed to the application styleguide.

Steve is an experienced, high-performing developer. He was able to laser-focus on certain architectural issues in our v1 codebase and was not afraid of the difficult work needed to do a refactor. We brought him onto our team to improve our complex blockchain API codebase that depended on a lot of different separate applications. He was quickly able to understand the entire project's architecture and improve what we had. Steve was diligent with code reviews & pull requests and constantly encouraged us to improve our own internal processes. His commits were frequent and he was able to resolve a ton of bugs and lay the groundwork for our v2 backend. He definitely doesn't mince words and will tell you outright if there's a better way to do things. I would highly recommend working with Steve! 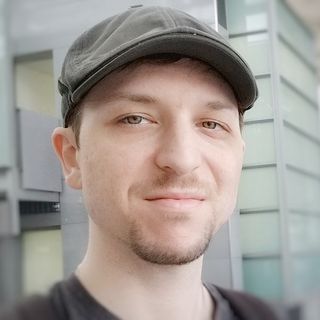